Posted at 12:08h in Aflatoxins by Luis Mata

Aflatoxin M1 is a toxin produced by the metabolism of aflatoxin B1 and can be found in the milk of animals that have consumed contaminated food. It is a genotoxic, carcinogenic substance, so its presence in milk and milk products intended for human consumption must be avoided, especially for young children.

EC regulation 2174/2003 establishes a maximum Aflatoxin M1 content of 0.05 µg/kg, but does not specify limits for other aflatoxins or mycotoxins in milk. Thus, the presence of other aflatoxins (B1, B2, G1 and G2) is not regulated. Because aflatoxins are a family of molecules that are structurally very similar, analytical methods may unfortunately have certain limitations when differentiating one molecule from another. 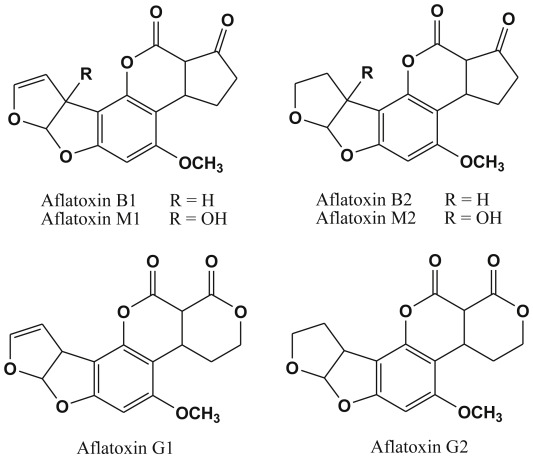 This must be taken into account, therefore, when selecting a specific method for the analysis of aflatoxin M1 in milk. The ISO 14675/IDF186 standard describing immunoassays for the determination of aflatoxin M1 in milk takes this situation into account and establishes certain specifications for the methods. Specifically, it proposes that any cross-reactivity* with other aflatoxins in the milk should be less than 20%.

Validation reports of existing methods usually include a cross-reactivity study with aflatoxin M2 only. This is due to the erroneous assumption that only aflatoxin B1 and B2 metabolites can be found in milk after milk-producing animals ingest food contaminated with these toxins. However, the risk from suspended dust from the feed gradually settling on surfaces (e.g. milking systems and tanks) in a livestock farm should not be ignored. Also, if it is taken into account that the maximum amount of aflatoxin B1 in dairy animal feed is 100 times higher than the equivalent dose of aflatoxin M1 in milk (Directive 2002/32/EC), the presence of aflatoxin B1 (or other aflatoxins) at levels sufficient to give a false positive result in a milk test should not be ruled out.

Thus, to compare the specificity of the AflaM1 Scan test against other rapid tests on the market, a cross-reactivity study was carried out with 5 aflatoxins. The results are shown in the following graph: 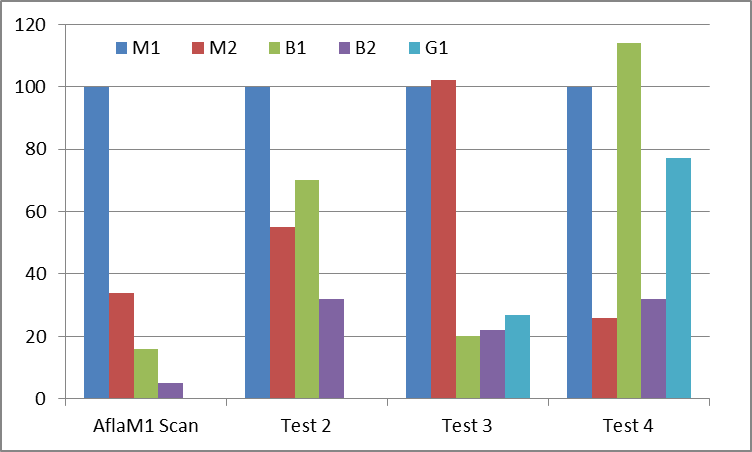 *Cross reactivity in immunochemical methods is evaluated from cross-reaction studies comparing other substances with the analyte of interest (aflatoxin M1, in this case), whose reactivity is normalised to 100% at a determined concentration. Other molecules suspected of causing a cross-reaction are shown as a percentage of reaction against the analyte of interest. Ideally, the cross reactivity of these molecules should approach zero.