Posted at 07:26h in Water and Marine Toxins by Pedro Razquin

Cyanobacteria (blue-green algae) are unicellular prokaryotes that thrive mainly in freshwater lakes. Being autotroph organisms they accomplish oxygenic photosynthesis playing a significant role in the food chain of several ecosystems. However, under certain circumstances (eutrophication, climatic change, etc.), they can grow and lead to uncontrolled blooms. 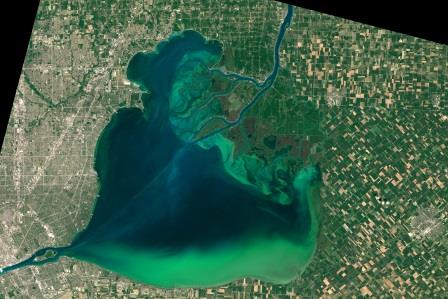 The risk of these uncontrolled blooms is related to the capacity that some particular genera have in producing pathogenic toxins. The most common and dangerous toxin is called microcystin and is produced by Microcystis, Anabaena, Planktothrix, Nostoc and Anabaenopsis. It is generally accepted that half of the blooms are toxic.

Microcystins are secondary metabolites that are normally located inside cyanobacteria cells. However, when toxins are released, normally due to cellular lysis, the freshwater becomes contaminated and its consumption turns hazardous not only just for humans but for animals too. It is important to address that toxin analysis does not indicate the presence of the microorganism. This issue may become a problem in drinking water treatment plants as toxin may release after cellular lysis. Therefore, it is advisable to perform an intracellular microcystin analysis prior to drinking water treatment.

During the last years the concern regarding cyanotoxin toxicity has not been limited to drinking and recreational water but to the intake of food that has been exposed to toxins (i.e. vegetables, fish and mollusks, which specially have a great bio-concentrating capacity). Until recent years, microcystins were linked exclusively to freshwater environments. Nevertheless, these toxins are very stable and persistent and may appear in marine water as well (due to downstream toxin transport). In fact, several studies have verified microcystin accumulation in mollusk bivalbes ready for human consumption.

Microcystins are mainly hepatotoxic and its long term exposition leads to a direct carcinogenic effect in the liver. They specifically inhibit serin/threonine phosphatases type 1 and 2A from mammals, which have tumor suppressor functions. Once the toxin is accumulated in the liver, they promote cytoskeleton disorganization, lipid peroxidation, loose of plasmatic membrane integrity, DNA fragmentation, apoptosis and finally necrosis.

Microcystins are cyclic heptapeptides composed by natural and no natural amino acids. They are very stable and thermoresistent and more than 100 variants have been described. Four of them (LR, RR, LA and YR) are especially frequent. WHO recommends consumption of drinking water with microcystin LR concentration bellow 1 µg/L. 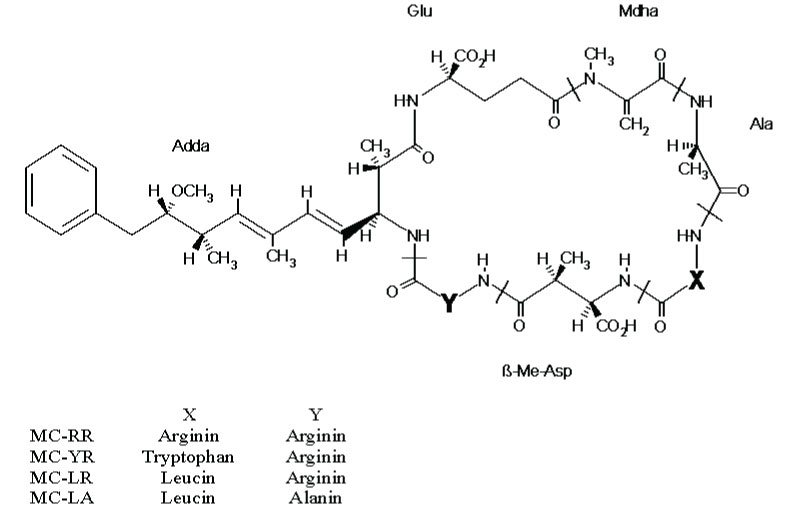 Potentially cyanotoxin producing blooms can thrive without toxin synthesis and release. One of the reasons arises from the factor that toxin and no toxin producing cyanobacteria normally coexist in a given bloom. The ratio between toxic and no toxic strains can vary significantly in space and time; factors involved are not completely understood at present.

Besides, the presence of a toxic strain does not imply that the toxin is being synthesized. A number of studies have tried to find a correlation between toxin synthesis and physic-chemical parameters (lake depth, temperature, nutrients, etc.) and biological parameters (number of genes related with toxin biosynthesis, amount of chlorophyll, biomass, etc.). However, no one of them has been successful and direct analysis of the toxin is the only reliable method so far.

Several methodologies have been described concerning microcystin analysis in water. The choice of a specific method is related to the use of the analytical results derived. The following table summarizes the main features among the current methodologies.

The methods can be divided in screening and confirmatory methods. Mouse bioassay, ELISA and PP2A inhibition assays are among the first ones. Screening methods have to be sensitive enough to avoid false negatives, fast, simple and allow the treatment of a high number of samples.

On the other hand, the confirmatory methods are the only methods that allow unequivocal identification of the molecule, being HPLC and LC-MS the representative ones. The disadvantage of these instrumental methods is that they require standards for every molecule that want to be identified. Sometimes, in the case of microcystins, this is not possible as more than 100 variants exist.

The methods can also be classified as structural or functional methods. The first ones are based on its physic-chemical properties (HPLC, immunochemical methods) while the second ones use the biological target of the toxins (PP2A inhibition assay and mouse bioassay).

It is clear that both strategies are perfectly complementary. It is advisable to use a screening method first, and if possible based on the toxigenic potential, followed by a confirmatory method. Sometimes, a positive sample could never be confirmed as there are no standard for all the discovered microcystins.

An important factor to take into account in microcystin analysis is that toxins can be confined inside the cells and have to be released first for the correct analysis. There are several documented methods concerning lysis and toxin extraction. However, not every method has been tested in terms of recovery and may give rise to toxin underestimation. More importantly, de extraction method has to be compatible with the analytical technique.

MicroCystest is a simple and rapid enzymatic test for the detection of microcystins and nodularins in drinnking and recreational water. The toxicity of microcystins is associated with the inhibition of protein phosphatases 1 and 2A (PP1 and PP2A), which can lead to hepatocyte diysfuntion. MicroCystest kit uses this inhibitory reaction for determination of microcystins concentration by means of a microtiter plate and a colorimetric substrate. The enzyme hydrolyses the substrate and the product can be determined by an absorbance measurement at 405 nm. As the ability of the PP to hydrolyse the substrate depends on the presence of microcystins in the samples, the toxin concentration can be calculated by using a standard curve.

MicroCystest is the first and only commercially available kit based on the inhibition of the PP2A activity by microcystins, and therefore able to detect all potential toxic microcystins present in the sample (over 80 different varieties of MCs have been described up-to-date). The U.S. Environmental Protection Agency (EPA) has verified the performance of MicroCystest kit for detection of microcystins under the Environmental Verification Technology Program (ETV).