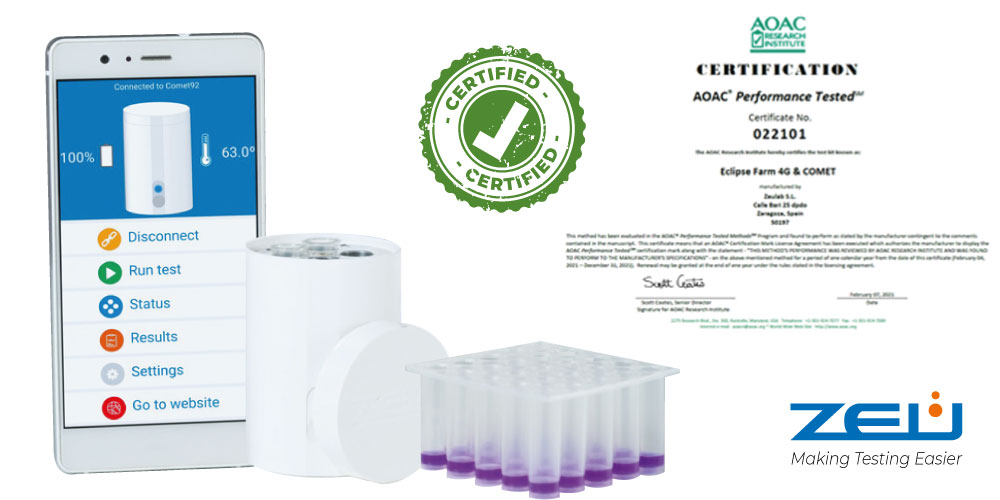 Posted at 13:25h in Antibiotic Residues Dairy by Pedro Razquin

The solution integrated by Eclipse Farm 4G test and COMET device, both developed and manufactured by Zeulab, has been recently validated and certified by the AOAC-RI (Association Of Official Analytical Collaboration – Research Institute) to detect antibiotics in raw cow milk.

The Eclipse Farm 4G test, used with COMET, has shown adequate sensitivity to detect most antibiotics used by the dairy industry in Europe at levels below the maximum residue limit established in European legislation in Regulation (EU) No. 37/2010. To assess the test sensitivity, both limits of detection (LoD) and detection capability (CCβ) were determined for several representative molecules of the main families of antimicrobials, such as penicillins, cephalosporins, tetracyclines, sulfonamides, macrolides and aminoglycosides. The false positive rate and the effect of potentially interfering substances, showed a great selectivity and specificity of the test. The effect of the milk composition on the test sensitivity was also evaluated, obtaining minimal deviations in the results, even with unusual amounts of fat, protein or somatic cells. In addition, the test was shown to be robust, consistent and stable throughout its shelf life.

The independent laboratory that performed the validation assays, was ILVO (Flanders Research Institute for Agriculture, Fisheries and Food). This independent scientific research center of the Government of Flanders, in Belgium, is currently one of the most important reference laboratories in Europe for the analysis of veterinary residues in milk. In addition, ILVO verified that the Eclipse Farm 4G & COMET system meets the approval criteria established by the Federal Agency for the Safety of the Food Chain (FASFC) of Belgium.

The Eclipse Farm 4G & COMET system has been designed to be used by anyone, without any specific training, because the test is very simple and the results are obtained automatically. The sensitivity of the test obtained in the validation is similar or superior to other tests in its category, making it a highly recommended test for all farmers, or the dairy industry in general, who want to have a high degree of safety and reliability in the quality of their milk. 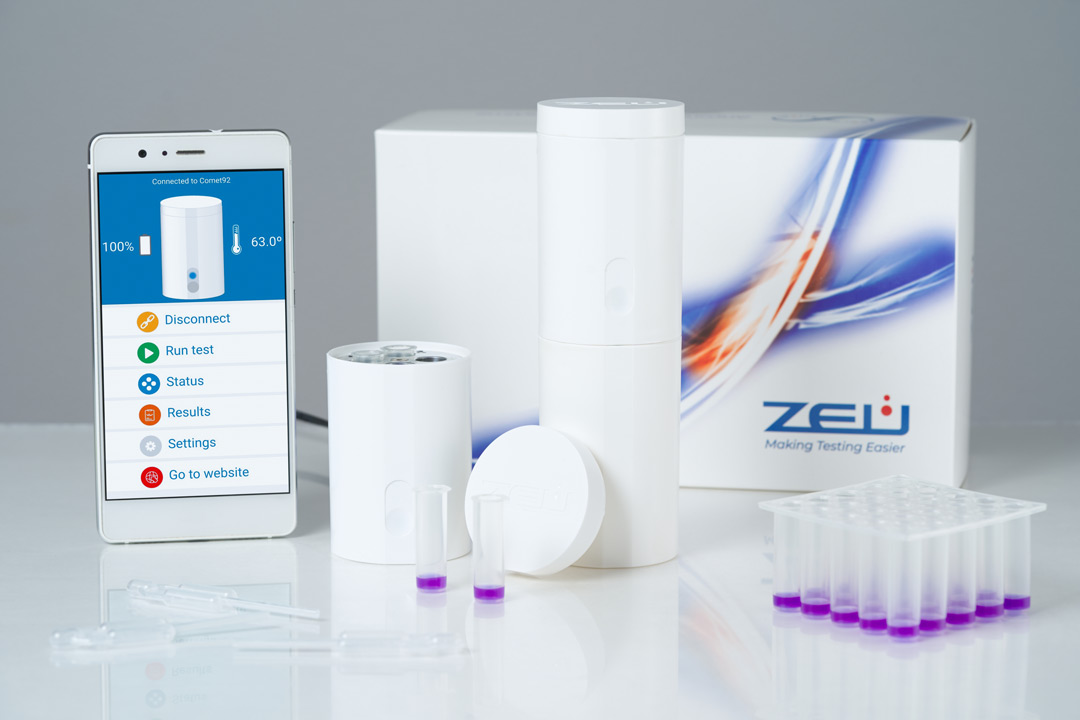 Eclipse Farm 4G & COMET is the first system on the market that allows to perform an antibiotic screening test automatically and in single mode, that is, without the need to analyze a negative control simultaneously. After adding a drop of milk into the test tube Comet will perform the test automatically in less than 2 and a half hours. The COMET device has four positions for simultaneous or individual analysis of 4 Eclipse Farm 4G tests. The device is compact and portable and handles all the assay steps: the incubation of the test at constant temperature, the end of the test at the exact moment, the result reading and the objective interpretation. In addition, the test is controlled from a smartphone or tablet with an App and allows you to receive and share the results in real time regardless where you are. The results are stored on the Test4all platform and can be set up so that the results are sent to your email or to other people.

The certification process began in April 2020 and, in less than a year, all the validation, review and approval steps have been carried out in an agile and efficient way. From Zeulab we want to thank the staff of both AOAC-RI and ILVO, for their dedication and professionalism throughout the entire process, which have undoubtedly contributed to the success of the project.